Family histories are the best. Last night, we watched Season 1, Episode 9 of The Crown: Assassins. It’s the story of Winston Churchill’s retirement, but it also tells stories of family relationships. The Crown adeptly combines family history with world history – not easy for either a writer or a filmmaker.

I’d like to do that in 1968: write a portion of my family’s history, and connect it with United States political and social history. It is the first book since The Last Jeffersonian that I need to plan. I also hope to have assistance from my brothers and sister, who have memories different from mine.

Key event of the year before: our family moved from Valley City, North Dakota, to Des Moines, Iowa, in August 1967. That meant a new house, new schools, a new job for my dad, and new friends. No one knew at the time what the move would mean for our family, through the 1960s, 70s, and 80s. My dad was ambitious, and he wanted to act on a larger stage. The four of us – Laura, David, Brian, and Steve – participated in that.

I include a portrait of Winston Churchill, at age 81. Another portrait, by Graham Sutherland, played a role in his retirement. This study by Bernard Hailstone, painted in 1955, captures Churchill’s character:

This update ought to show me, and anyone else interested, that my interest in writing about politics won’t go away, just because I want to write about my family. My energy goes there, my knowledge goes there, my interest in history goes there. Right now I’m reading Chris Matthews’ Bobby Kennedy. He occasionally inserts autobiographical notes in his biography, but mostly he stays with his subject.

Right now my conception of 1968 is that about half will deal with political and social history, about half with personal and family history. If I can integrate all of these things artfully, so much the better. I have little confidence I can manage that, mostly because I have not tried anything like that before.

Why do I write these thoughts now? Because my motivation for this update was to write more about Churchill, or more precisely, to tell a joke from the script of The Crown. The Crown tries to stay true to history, so I expect Churchill’s words from actor John Lithgow may not be far from his actual words.

First, I want to show you Sutherland’s portait: 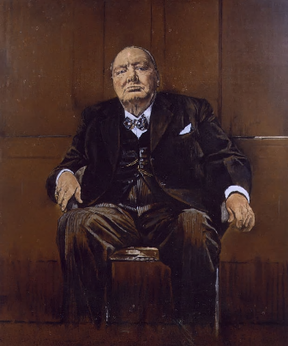 Churchill said, when asked what he thought of the painting, “It looks like I’m making a stool!” Or, as we would say now, “It looks like I’m sitting on the pot, having a bowel movement!” Either way, it’s classic Winston, to get right to the blunt point.

Sutherland earned his commission, 1,000 guineas, solicited from the Lords and the Commons. Stated purpose of the portrait: honor Winston on his eightieth birthday, with a gift that would hand in the halls of Parliament. Unstated purpose, developed in the episode of The Crown: somehow persuade Winston to resign, or retire. It worked.